The new BMW 3-Series delivers driving satisfaction both in everyday driving and on curvy rough roads—yet with better fuel economy than in the past, with most 3-Series cars now returning more than 30 mpg on the highway if you keep it smooth and responsible. This makes it a premium everyday car with lest maintenance cost.

BMW is renowned for its prowess in driving technology and arguably holds the biggest class advantage in this regard – as a matter of fact, the previous 3-Series was regularly hailed as the best car in its class to point down a piece of tricky tarmac. The current 3 series sustain this class act.

The new 3 series is not necessarily more tactile than the older ones, but it’s certainly smoother and more supple, particularly with the must-have optional Adamptive M Sport suspension. The steering is nicely weighted and the front end is so accurate and responsive that you know exactly where you are with it at all times. It’s smooth, enjoyable and exhibits deftness in all it does. What’s more BMW seems to have nailed the relationship between supple suspension and run-flat tyres. This 3-Series is more cohesive than ever, something that’s only enhanced by this tweaked and even more near-perfect facelift.

Exterior design is defined by the classic proportions of a sports sedan. The hood is lower at the nose, but rises higher than the previous model thanks to pedestrian safety regulations; the cabin is larger and longer. BMW gave the 3-Series a few styling tweaks for 2016. Headlights and taillights have been redesigned with even more distinctive signatures when illuminated. Front and rear fascias were also reshaped.

Although its dimensions have grown considerably in recent years, the new 3 Series is still very much a compact sport sedan. That means you’ll find plenty of space up front, where a wide range of adjustability enables almost anyone to find a comfortable position—this is true whether you choose the base seats or upgraded Sport seats with extending thigh bolsters and stronger side bolstering. The 3 series is still true to the original design concept – a self driven luxury car that prioritises absolute fun for the driver.

The trunk space is good (480 litres), and with the right option package you can move your foot under the rear bumper to open the trunk when your hands are full. The Sports Wagon provides much more utility, and offers an appealing compromise for active families who want an engaged driving experience and a good measure of practicality.

The BMW 3-Series has long set the performance benchmark for compact sport sedans. That continues to hold true, even as it has become slightly softer and competitors have gotten much better.

The current 3-Series lineup offers several turbocharged engine choices. To start, there are two variants of a turbocharged 2.0-liter inline-4: it makes 180 horsepower and 200 pound-feet of torque in the entry-level 320i, while rising to 240 hp and 260 lb-ft of torque under the hood of a mid-range 328i. Under the hood of the new range-topping 340i is an all-new turbocharged 3.0-liter inline-6 that produces 320 hp and 330 lb-ft of torque. The 335i Gran Turismo retains last year’s 300-hp six-cylinder engine.

Rear-wheel drive is standard on all sedan models, with available all-wheel drive. An 8-speed automatic transmission is standard, but BMW offers a 6-speed manual as a no-cost option for 316i, 318i, 320i and 328i models.

A 3-Series delivers balanced handling and dynamics regardless of body style or drive type, but sedans with rear-wheel drive have a slight edge. It’s important to note that the 3-Series isn’t as sharp as it once was; it has gotten softer and more comfortable, but it’s still a capable back-road hustler. The 340i is undeniably potent, but the 4-cylinder turbo in the 328i still offers a lot of speed and fuel efficiency, and working to keep its performance at full boil might make it more fun.

Despite the over 70% increase in the prices of cars in Nigeria due to FOREX, the base prices for the 3-Series tend to be largely reasonable and highly competitive among its segment and even to other value sedan class. According to the Coscharis BMW Sales Divisional General Manager, Joseph Omokhapue, the starting price for the 3 series is in the mid-N19,000,000.

There is also the option of a service inclusive package, which guarantees the maintenance of the car for a period of 4 years or 100,000kms (whichever comes first) at no extra cost. Customers also get as standard, a 24-hour mobile service provision across the country; availability of back up vehicles in a case where we have to keep your vehicle beyond agreed service period and special packages for all fleet owners.

Any 2016 BMW 3-Series should provide good occupant protection in most crashes.

Federal safety authorities have given the 2016 3-Series a five-star overall rating, including four star frontal and five-star side impact ratings.

In the IIHS small overlap test, which simulates what happens when the front corner of a vehicle collides with either another vehicle or an object such as a utility pole or tree, sends the vehicle into a five-foot-tall rigid barrier at 40 mph, lining up the vehicle so that the barrier is struck by 25 percent of the total width of the vehicle.

A host of driver assists are available, but they tend to be optional rather than standard. A Driver Assistance package includes a rearview camera and rear parking sensors, while the Driver Assistance Plus package adds a surround-view camera, blind spot monitor, lane departure warning, speed limit data, and an active collision mitigation system.

The new BMW 3-Series delivers plenty of performance, but not at an undue cost to the environment. Even the 340i with a turbocharged 3.0-liter inline-6 is rated for 33 mpg on the highway, according to the EPA. Things just get better with the line-up’s other engines, with highway ratings of 35 mpg for the 328i and 36 mpg for the 320i. What’s more, with a relatively judicious use of the accelerator pedal, it’s often possible to achieve these numbers in real-world driving conditions.

The entire 3-Series line-up enhances fuel efficiency with a start-stop system that shuts the engine off at stop lights; this happens only when automatics are in drive or manuals are in gear with clutch and brake pedals depressed. A Brake Energy Regeneration system, used in some models, further reduces fuel usage by delaying aggressive alternator usage until you brake. You’ll also save petrol with an Eco Pro mode that softens throttle response, shifts earlier, and makes accessory operation more efficient.

According to Joseph Omokhapue, Coscharis could offer a discounted insurance rate and a free registration on the BMW 3 Series.

No BMW 3 Series suffers from particularly bad depreciation, but if value retention is a priority then we offer a trade in option, especially for customers who intend to upgrade to either the larger BMW sedans or SUVs. According to the Trade In Manager, Philip Umeh, the used BMW 3 Series is one of his fasted selling vehicles. 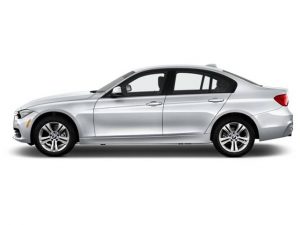 The BMW 3 Series has been a class leader for more than forty years, and not wishing to be outdone, BMW facelifted the 3 Series in mid-2015, adding updated lights and bumpers, new engines and a lightly revised interior. The result is a superb-driving four-door saloon that’s better than ever, thanks to an appealing mix of upmarket badge appeal, an enjoyable chassis, smooth engines and low running costs. Good as a retail or fleet car especially given its superb fuel efficiency, performance and maintenance.

Back to media page